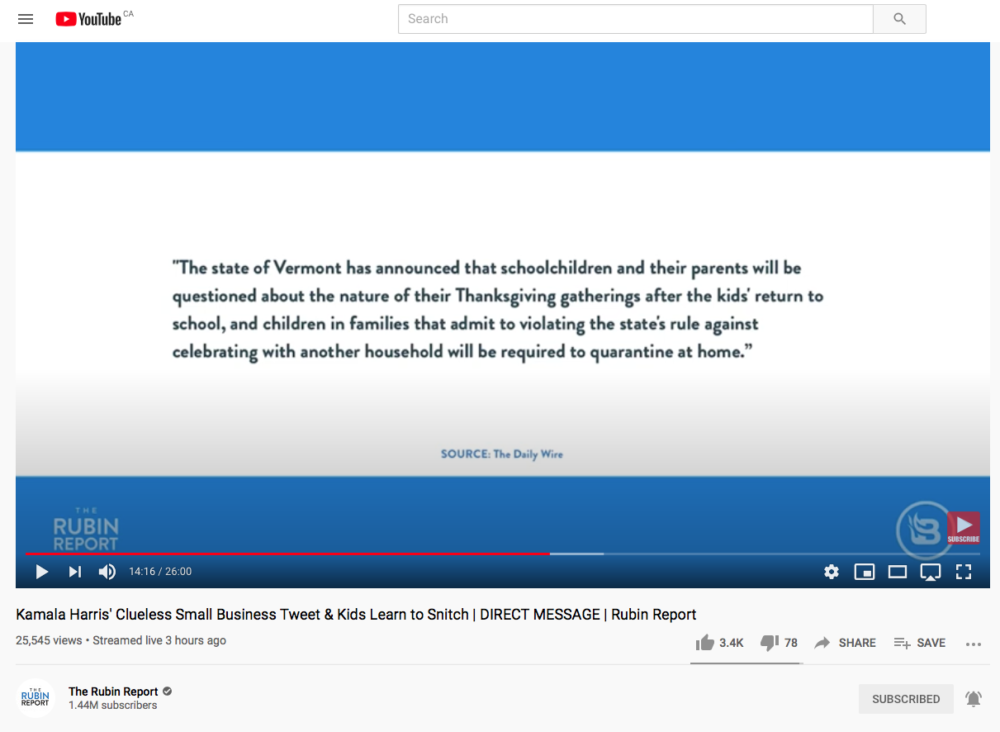 Is a culture on the brink of social collapse when it begins authorizing its children to snitch on their parents? Pictured above: a screenshot from an episode of The Rubin Report after Tuesday November 24, 2020, when Vermont Governor Phil Scott ordered schools to interrogate children for the purpose of assessing whether their parents had broken Thanksgiving lockdown rules. Meanwhile, during a news conference earlier on Sunday March 29, 2020, Montreal mayor Valerie Plante and police Chief Sylvain Caron encouraged residents to snitch on neighbours breaking lockdown rules. “If there is a situation that is happening close to your home and it is abnormal. . .like if you hear a gathering with loud music, what we’re asking people is to warn us.”

Due to fraud and incompetence, the public loses faith in the fourth estate, a critical pillar of our democracy. All information is cast in doubt. The authorities have arranged their data; and the people who analyse the data for themselves have other ideas. Tension grows between the governing and the governed. A rift is growing between the herdsmen and the herd. We face a crisis of belief, a crisis of trust. We grew up being warned away from ever establishing a police state, yet here it is. The question becomes, What sort of social order may be carved out of such a situation? Scarier perhaps, we must face the Corporate Feudalism that quietly crossed the Rubicon some decades ago.

Typical, how civilizations unravel: they formalize and establish a system of doing things (of procedures, protocols)—this happens in all arenas of human activity (i.e. professionalization, gentrification, canonization, colonialisation, legalism, feudalism, Marxism. . .). The metaphysical premise may or may not be true—and this conundrum is often acknowledged, only to be dismissed because the premise (whatever it might be) is generally deemed in some way to be “obvious” to anyone with eyes and a modicum of imagination. The premise, however (as history bears out), is invariably incomplete. With time it develops into a perception utterly fanciful and with very little correlation to reality. Such a schism between perception and reality engenders psychological agony and social upheaval. Procedure and protocol, however, lock out dissenters and lock in the nightmare. Without fail, some form of brutality ensues.

A culture unravels inevitably because it takes its paradigm, worldview, metaphysic, first principles to their logical conclusion through a deductive process, a reductio ad absurdum, at which point the society loses coherence, goes mad and thereby loses credibility. Summarily, it is perceived to have been barbaric, and is judged mercilessly, often resulting in violence and war.

Let’s be more specific. A culture establishes first principles to form a baseline that the group takes to be common sense: let’s say. . . Jesus is our saviour; we eat God as sacrament. In fact the magical blessings of priests make God literally flesh and blood through a transformation of bread and wine. Therefore, we eaters of God should make everybody just like us. After all, we possess the only true Truth (in our guts). God wants us to be good people. We should turn the other cheek and not fight but love our neighbours—well, at least most of them. You’re a born sinner and suffering is your lot unless you’re saved. To be saved, the priests have to pray for your soul after you die. So make sure you pay them well even though lucre has nothing whatsoever to do with matters spiritual. In fact paying off priests is as bad as sinning gets, but do it anyway just in case and call it charity. Whatever else, be a good person. Here are the ideals you should live up to: be honourable, courageous, loyal, chaste, humble, moderate, loving, generous, charitable and helpful. When you fail to live up to these values, sit in a box and feel shame for a few minutes. Jesus passes on the Holy Spirit with the laying on of the hands, and the Spirit is passed along like a social disease through touching—(some touching may unfortunately lead to an embarrassing fall from grace, not that kind of touching)—touching from generation to generation through time so that you get Jesus by contact, and in a way you become a smidgen of attenuated Jesus. Ergo, as the people of the Spirit, we must defend The Holy Land against the infidels; let us go out among the heathen and slaughter them.

The reasoning may seem a trifle weak in retrospect, but in its day, this was the stuff of scholarship and the daily porridge and mainstay the majority chewed. They made it their bread and their mortar and cement. It found expression in the ornate architecture, the attention to beauty, to ornamentation, celebration of successes and victories, and pride in one’s works and social standing.

It could easily have been an absurd reduction from the no more reasonable Age of Reason. For instance, the first principles assume that the universe is like a machine. We see machines all around us and they function according to an engineered system. Therefore God is a Watchmaker and Mighty Engineer. Let’s call Him The Supreme Being. Actually, correction: the whole orderly design emerged accidentally out of an accident. We don’t know how, but here’s a story (hem! a hypothesis, hem! a theory) we’ll make up and call “science” because that’s what reasonable (rather than superstitious) folks call their cogitations. In short, by Occam’s Razor, God is superfluous to our hypothesis. In fact only primitives believe in God or anything that does not appear to the eye or appeal to the fingers. Therefore forget millennia of wisdom and ethical thought and put your faith in money. Consequently you’ll need insurance for your salvation. Consequently your safety is the highest priority. Consequently you’re grounded and under house arrest indefinitely; it’s safer and cheaper that way. Meanwhile, we are engineering a master race that will live forever because we’re taking over the unmysterious processes of accidental mutation without design that resulted in outstanding complex design accidentally. Actually, cancel that: we’re working on a master intelligence based on special bean-counting algorithms. All of History is about power and money, the control of resources, the means of production. Therefore competition is key to your spiritual perfection. Learn to resent your neighbour for the privilege of his race, ancestry, gender and sexual orientation. Nurture a jealousy of those who have more wealth because healthy, rational folk measure themselves in dollars. Purchase physical enhancement surgeries that make you look like a lizard-person in a human bodysuit. Everyone should look perfect and clean. Therefore you must wear a mask that hides your face. Uniqueness is primitive. Don’t say “primitive”; that’s offensive. Well, uniqueness is offensive. Those who will not be free of their own free will, will be forced to be free. Thus spake Jean Jacques Rousseau early on in the establishment of this new ethical experiment.

The cultural story need not be coherent; it is never more than a jumble of semi-apprehensions and deductive riffs on the first principles or underlying assumptions. Those who perceive the lack of cohesion are the poets, the visionaries, prophets. They believe all can see what they see; but a metaphysic is a blind like the kind they put on horses. The group becomes enchanted, falls under a spell of righteousness and pious habits. It becomes a herd of administrators. The keys to unlocking the gates of this prison are Beauty and Metaphor. The making and reading of metaphor and symbol reveal the shakiness of any ground upon which we establish first principles. Awaiting always on the horizon is a new reading, a new significance, a new formulation, a novel analogy adumbrating a previously unperceived relationship, an undiscovered purpose; we stand without ground beneath our feet; we stand in the precipice, held aloft by the vital, creative energy of Evolution.

Asa Boxer’s poetry has garnered several prizes and is included in various anthologies around the world. His books are The Mechanical Bird (Signal, 2007), Skullduggery (Signal, 2011), Friar Biard’s Primer to the New World (Frog Hollow Press, 2013), Etymologies (Anstruther Press, 2016), and Field Notes from the Undead (Interludes Press, 2018). Boxer is also a founder of and editor at The Secular Heretic.