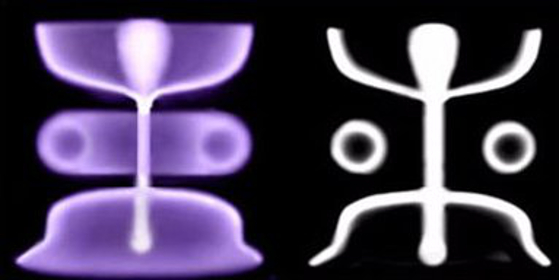 Could it be that it’s an invisible
yet detectable electricity
connecting the dots of the stars of the Universe,
keeping the suns and the planets in their places?
Could electricity, that filamentous
force, out-matter gravity?!

Amos, amid the twilight, lightly tip-
toes glowingly toward me, as though

striding a tight-rope of my eldest dreams.
Niccolo, Flavia, Amos
and Laura (the girl with the camouflaged shirt),
as well as three hundred others are here—
ones who saw me blasting on the sky-blue
table-top, with hand on hip, wherefrom
I was descended and apprehended,
wherefrom, contra my conatus, my
illumining spirit was divided from
the darkening ones, then contained
inside the super-tinted police cruiser
like a virus inside a laboratory—
wherefrom, in the wake of high rioting,
it dragged, like a funereal opera,
toward St Joseph’s, for a ‘quieting,’
with shots of Haldol—inside the bubble room–
and lots of Clozapine, each juxtaforced

into my bloom of soul whose pollen of glow
thus may be low in the dying twilight now.
And Flav, Amos and Niccolo waited till
the right’s councillor showed, and signed
my discharge form before me faster than a master
forger pens a promissory note
before some sun-blind teller at the bank—
after which I coma-strode out
into the open evening. I swallow

three days’ doses of my angel-
upper—Dextroamphetamine—that I

might break the sleep-knot of the downers,
that I might re-engage with those who stood
both amid—and also then withstood
my blasts of afflatus in that sand-brown square—

glimmer vermillion. The cricket-music
rises with the yellowing fires
flickering up into the fireflies,
into the brightening constellations.
No back-turn’s wind will sweep the shardy stars,
No Agency will waste Nature’s nurse.
No Iron Hand will bend these bars of verse.
Some will come in the name of the LORD and proclaim:
“my miracles are really in His name,”
yet, in fact, they will be of the Serpent.
Beware of those who come in the name of the Christ
and, as I continue to thrive in my
Christian-hood, in my vision-hood, beware
of even me. Behold my imperfections;

behold my package of Marlboro Reds,
yet, too, behold the bar I overleapt—
the bar that trussed me from asphyxiation.
And behold this “madman,” or whatever
I am, always apprehended when
about to blossom into tuneful timelessness;

when about to arm-wrestle the media-
cast, massive invisible hand that’s pricked

our wriggling kind upon the stinging
pin of its faithlessness. Beware
of those who come in the name of the Christ,
blazoning to be The Glowing Ones.
Behold my imperfections—especially if
you see me perfecting—even if I seem
to perfect myself as fast as loose November leaves
blow from trees in massive blasts of wind.
Jesus Christ is perfect in every way.
Behold Amos; behold the Torch of the Sublime,
which he has steadfastly sustained above
the miasmal waters of postmodernity,
all the while treading the nauseating
sea, or treading the stony sea-floor—
slowly, forwardly till, finally
reaching the shore of the future, where we
now stand. O, what on this earth, and what
in that Heaven, would I be, if not for
saint-bold Amos! Behold, I’ll be terse
as time’s few guarantees; behold the widely
galaxies, the universe amid
the skies, and the universe amid
these words, which may be akin—as stars
are akin to fireflies—to the universe
beyond the skies. I’ll be terse if you will
simply behold the electrical universe.

Could it be that it’s an invisible
yet detectable electricity
connecting the dots of the stars of the Universe,
keeping the suns and the planets in their places?
Could electricity, that filamentous
force, out-matter gravity?!
I afflatically sing into overdrive:
The moonish half-light of science has
eclipsed the suns of mythology; and the keys
to astrophysics, to nanophysics,
to the gears of existence, are bundled
inside ELECTRICITY. I believe,
with Velikovsky, that myths of yore now jangle
these keys; that the incredible events, both natural
and, to our minds, supernatural,
the tales of above and below depicted in ancient
myths cannot be accounted for as mere
aberrations of the psyche, as Jung
would have it, or of historical subterfuge,
as Graves would have it. No! Let’s credit the gifts
of our ancient ancestors! They told, as we
tell, what they perceived with their keen senses!
Dismissing what another has witnessed is
stealing another’s heart, dishonouring his mind,
denigrating his life! We must not stoop so low,
must only stoop to come down from the plinth
of our self-congratulation, only
to ply our imaginations to the rich
realms in which others have suffered and thrived
and recorded their riveting lives! These
strange-to-us phenomena, in ancestral
skies, can only be explained by ELECTRICITY,
by her sister MAGNETISM, and by her
sister LIGHT; by the careful, plodding paths,
the dead ends, the incremental advances of
observation under the dun and un-
spectacular aegis of natural
philosophy—the true physics?! Even today,
as I speak, steadfast intelligences
reveal how electrical discharges, created in
laboratories, appear exactly
as cave-paintings all over the world.
Take, for instance, the Wheel of Emanation—
call it the dielectric medium; call it quantum fluid,
the Higgs field or what you will; for,
ÆTHER has many names. This wheel
is its mark and seal, which reveals itself,
both large and small, above and below, by
microscope and telescope, in magnet
as in Nebula—for what is the snake
that devours its tail on every continent?
And what the cosmic column pin-wheeling
the low ancient sun? And also, in every
continent thus: I have Amos to
thank, for opening the ‘eyes of my eyes.’
Amos bows with his orange-yellow torch—
the crowd explodes into more ovations.
It was during a vision near Armageddon,
when Amos, a soldier of the Israeli army,
realized his callings as Seer,
cosmologist, and poet. He returned
to Montreal, his birth-place, penning
and lecturing on numerous subjects
—especially verse and cosmology.
His father, Avi, died when Amos was
a teenager and so the great mentors
of that language-enraged city, helped raise
dew-diaphanous Amos, teaching him
to read music and compose in heroic
pentameter. With the enshrining of
falsehoods, and among the flimsy paper
generations teeming and organising
into ever-greater corporations,
with the Age of Giants at hand, Amos
picked away at the wallpapers of
mendacity to reveal the dry rot;
and he dedicated his lives-like life
to the revival of vital ÆTHER —
the lost, most essential element,
which lies at the heart of creation; the
ZERO at the crux of the Cartesian
Plane; the origin and sum of all measures.
To this principle and to the Holy
Spirit, as much as to Verse, he dedicated
himself, jangling by my raving ear
the keys to our deepest questions that, by my
raving mouth, I might impart like a host
of flaming arrows or a many-tongued
lightening bolt to YOU, my loving listeners.

Laura winds down the Cliffside toward the guardrail. I
fast-draw a cigarette from my breast pocket. As I strike my
match, a massive gang in zombie masks sucker-bludgeons the
audience with hammers, sucker-stabs the audience with neon
knives, jump-kicking and jump-punching into the petrified
crowd. Amos chokeholds an assailer off his feet, then, after
slamming him into the denticulate ground, refuses to release
his grip on the masked-man’s throat. Amos! I cry. Amos
presses his thumbs into the ski-mask sockets, screaming. He
releases his grip in time to roundhouse into another masked
man about to strike me in the back of the head with his
green Easton bat. The thug jumps up and jabs Amos twice in
the face—only enraging Amos, who foot-sweeps him into
the fire. Amos and I go back to back, now, as one unit, then
bloody and uppercut a few more of them, after having taken
some monster blows ourselves. As I catch my breath, I see
Flavia and Niccolo back to back—one unit—staving off two
more assailers with zombie-masks, one of whom Flavia upper
cuts from behind, in the back of the testicles. Niccolo—his
nose now bleeding—apprehends another in an arm-bar,
breaking the assailer’s appendage in two places. Niccolo
hasn’t been in many fights, but he is a natural fighter! Amos
smiles at me from across the way. As he shoots toward us,
one of the masked men throws a pale of gas or paint-thinner
upon the visionary. No-o-o-o-o! I scream. “Amos!” Niccolo
warns. Equidistant to Amos, another assailer creeps forth
with Amos’ torch. I sprint forth and tackle the man, just
before he can reach Amos. I jab him twice then flying
uppercut him into the flames. Amos! Run from the fire! Run
into the bushes, bros! Run! Amos dashes deep into the forest
on foot-soles of near-silence, barely shaking the bushes.
Finally, the assailers sprint down the Flatrock and onto the
trail leading to Scenic Avenue. Some of us, still standing,
push forth in pursuit; yet we soon see that we have no
chance of catching up to our attackers. We stop, turn, then
retrace our forward steps back toward the Flatrock to tend to
the wounded.

C
… I’m still in the bushes … My advice: don’t orate for a
decent while … Lay low, network underground. Those were
no vandals, but hired hands of the Tandem. Meet me at
Hortons in 45 min.
A

Marc di Saverio hails from Hamilton, Canada. His poems and translations have appeared in such outfits as Maisonneuve, CNQ, Hazlitt, Event, and the Fiddlehead. In Issue 92 of Canadian Notes and Queries Magazine, Di Saverio’s Sanatorium Songs (2013) was hailed as “the greatest poetry debut from the past 25 years.” In 2016 he received the City of Hamilton Arts Award for Best Emerging Writer. In 2017, his work was broadcast on BBC Radio 3. His debut became the publisher’s best seller in both Canada and the United States, and he published his first book of translations: Ship of Gold: The Essential Poems of Emile Nelligan (Vehicule Press). Forthcoming with Guernica Editions is his epic poem, Crito Di Volta.