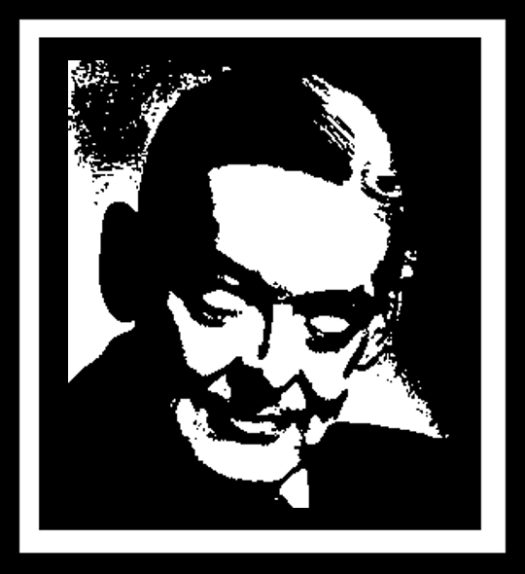 In what follows, poet Asa Boxer considers T. S. Eliot’s famously arcane poem “Four Quartets,” working to invigorate the original with electrical energy in an attempt to blast readers with a zombie cure and awaken poetry from its dormant zombie state. Without further ado, here is “Four Quartets for Zombies.”

Picture T. S. Eliot as Magus, stopping a rain drop mid-air,
asking of it how it turns the world on its head, inquiring
whence it came, what relation to the fountain
into which it will shortly merge and ping concentric rings.

Hard to imagine Thomas Stearns dancing, letting loose.
Pedantic fallacies aside, we suspect he is Prufrock,
afraid of peaches, their suggestive juice upon his chin.
(O, humour so highfalutin, who laughs among the bushes?)

But here’s Tom Magus dancing between rain drops,
between past and present, afraid of getting wet.
He has good reason, because Tom, you see, would like to be
a Tesla of poetry, one who grounds electricity.

A cloud full of lightening settles over his laboratory.
Upon his counter, a compass, a crucified frog, notes.
At heart, it’s a romantic experiment, but the air
is so thick with erudition, he floats above the earth.

Let us go now where Tom cavorts with mermaids
and drown him in human voices in the fountain
in dangerous weather under the cloud under the roses
where the present dies and the past lies etherized.

Hard to imagine Thomas Stearns at sex, but picture
him nevertheless a Ken Doll, anatomically intact,
engaging that end of life, taking the creative force
by the hips, as it were; knocking at heaven’s door.

One wonders, did he ever make it? Come. Let us
make our terrestrial visit. Dog, dig love up again
where it gangrenes in the chest of that corpse
in the unreal city. Pinch your nose, roll up your sleeves.

You stir stagnant waters. (Do not ask, What dream is this?)
Remember her hair catching sun, a solar flare,
as kingfishers catch fire, as lenses reflect, pupils glare;
and so she sits at the bottom of the stair,

shielding such wonderful eyes as awaken eyes everywhere.
Weave sunlight and hair. We are almost there.
Spells last a spell only and new poets plough hell,
drop seed, speak sparks and drive the black mares;

hooves flashing, cleave dark, the sheen of their coats
rivering, rushing their gleam over the beams of the moon,
pressing through shrouds of gloom. Look there again,
and see again: witness the heart in its grim cage sing.

And when the heart dies, with his words, he digs it up again,
defibrillates, syncopates, hops between drops—at least
Hopkins does, and Thomas in his wake, like Reggae sprung
on frogs’ legs leaping green from stagnant waters.

In the good old days, Tom Magus needed merely turn a phrase,
and the rain drop obeyed. Now the great globe itself
is a substantial, overcrowded pageant, and the rain crashes
upon an ordinary man, soaking him, tearing through roses,

So the wet hierophant must screw deeper into prose,
exchange his starry robes for a trench coat, a cape,
a reversible poncho, that he might turn the outside in
and the inside out before diving after himself.

Trouble is, when Thomas Stearns gazes into the mirror,
a wintery erudition sweeps in, crystalizing his reflection.
Too much reality, sore footed, refractory, world-wizened,
we plod a burnt wasteland with parched camel.

The mind coils under a rock of the brain to hide from magi
who sling slogan and symbol like a bolas, tripping me into you,
spell-binding first person I after I into fasces.
Shadows cast the matter and so they see no shadow.

Time present and DJ Boxer finds his grooves, drops
his needles, mixes a medley of time past, and raps
a pastiche-fusion of poetry, spins new unions,
into a clockwise spell turning on borrowed magic.

Not for my ego alone, I pick like a baglady, like Suzanne
in rags and feathers, like a seagull among wasteful tourists
salvaging morsels. By no machinish trick, I must redeem
the shells of the small present for living sand dollars.

One might rightly ask: Faced with Prufrock’s patient
bled out by barber science—its brain set upon the scale,
its clockwork ticker laid aside—does one turn back with Eliot
to Christ sprawled and wriggling on his pins?

By way of answer, let’s revisit Doctor Tom in his lab.
We find he has harnessed reason to voltaic chemistry
and behold as he declares in his best German,

The trouble now is Death himself has risen,

and with what dread teeth, he spreads the poison.
Death in a lab coat mixes up the medicine: and gone
is the fountain, the laughter in the rose bushes;
only accident now ripples air and puddle in the garden.

Zombie Tom laughs at Evil: Silly superstition, that.
He seeks instead to explain the cathedral by the quartz
and rust in its rocks; his work confirmed by rounds
of priests who walk the briar, loosing the gowns of desire.

Shrouded in clouds of cordite and mustard gas,
scented with a whiff of Zyklon and Nazi oven-smoke,
with sour notes of death from Vozrozhdeniya, an aftertaste
of rip-roaring rape, of a shadow burnt into a wall;

evil stands defrocked. No poetry can salvage, no aesthetic
rehabilitate, no religion exonerate God. Only atoms now
and molecules remain. Surveillance and chemical castration
will correct the criminal vein of evolution.

Lend the zombie a hand. What harm now? Liberty too
is but a baseless by-product. And love making
and beauty are for dupes who think they have a soul,
fools who seek a wizard at the levers of the world.

Sadly, my friends, the etherized patient has died.
What catalyst, then, turns Thomas Stearns from his lab
toward the mannequins in the sanctuary?

A recognition.
Remember that frog on the cross?

When the leg of that frog twitches, the needle
of the compass spins as if bewitched. Magic is alive;
God is afoot. But not as before. This time, magus
and priest wear white coats. They clock, weigh,

measure, tabulate data. Magic, in sober spectacles,
after a deep breath and a coffee break, admits
to simple magnetism, and God rubs his eyes, consults
his watch, says, This is not what I meant at all.

The terms have changed and like snakeskin lie in a heap.
That corpse, the mannequins, the cathedral itself
are empty, true. Now, time present, is the time to imbue.
Magic now plays with magnets; God speaks evolution.

The compass points where the twins reflect, where
shadows spring from the lantern, where sparks fork
forth from the dark, volts vault and shock from the naught.
Mannequins do not ignite crusades; zombies, however,

those with pumps for hearts and algorithmic brains,
who heap the world with beans for counting, shadows
who scoff at their own mystery will one night find the world
knows only shadow and amounts to much the same

as when witches brewed, and vampire kings arose,
and mythic knights slew dragons for their gold.
In short, they’ll find all the work of ages undone,
for the soul is no vestigial set of gills causing hiccups.

When Thomas Stearns enters the sanctuary, it is not
a turning away, but rather a cabling of the dry, linear mind
to the aetheric fountain of phantasy. He braves the Choir,
Sweeney Among the Pederasts, to kick up the old dance.

DJ Boxer plays the flipside in counter-time. Reality emerges
like children with arms spread walking the fountain ledge
—a teetering precessional dance tilting, leaping, laughing,
troubling the rose bushes and the gorgeous world into being.

Asa Boxer’s poetry has garnered several prizes and is included in various anthologies around the world. His books are The Mechanical Bird (Signal, 2007), Skullduggery (Signal, 2011), Friar Biard’s Primer to the New World (Frog Hollow Press, 2013), Etymologies (Anstruther Press, 2016), and Field Notes from the Undead (Interludes Press, 2018). Boxer is also a founder of and editor at The Secular Heretic. His “Four Quartets for Zombies” is also available in limited edition chapbook form.