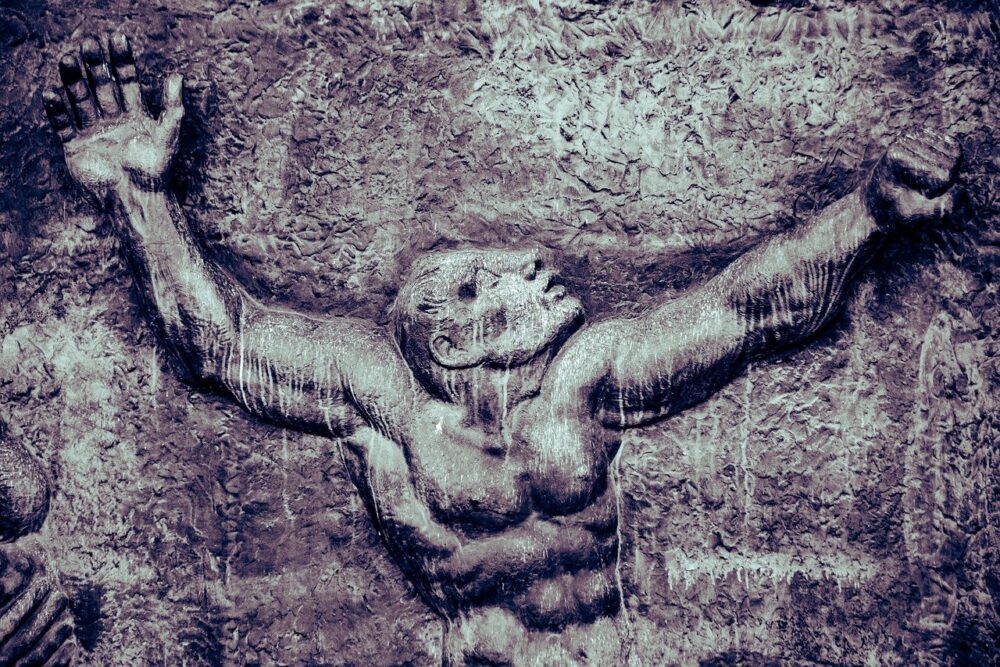 The following investigation is a product of the ongoing scientific inquiry ‘whence human suffering?‘, the same encountering a critical need to call into serious question the long-standing pi (π) “approximation” methodology (ie. of exhaustion) first employed by Archimedes (late, c. 287 – c. 212 BCE), and then by mathematicians and scientists ever since.

To begin, the author draws attention to an important inquiry: ‘ does π ever naturally emerge as a product of a square? ‘ If so, it must be measureably so such to negate any/all need/inclining for “approximation” methodology(s) employing the use of multiple straight-edged polygons. Now consider the quadratic:

and find it to have positive solution x = (1+√5)/2 which, as the reader may recognize, is the so-called golden ratio (hence: Φ). By expressing Φ in/on a base of 2π (thus generally applicable to rotational motion):

we find a numerator difference (being a matter) of a discrete 2π:

and so we have an answer to the former inquiry: 2π discretely emerges as a natural product of a square (if/when based on the same).

Concerning Φ: there are non-trivial (universally unique) properties it possesses as intrinsic – it is the only positive number (irrational, no less) whose reciprocal is precisely one less than itself:

and (as we previously encountered) Φ is the only positive number whose own square is precisely one greater than itself:

If π is a natural product of a square, we must be able to utilize the geometry implied by Φ such to precisely measure this emergent π and, importantly: do so without the need/inclining for”approximation”.

Prior to this endeavor, the author implores the reader to suspend (if even temporarily) any/all hitherto taken-to-be-true notions concerning π: both quantitative and qualitative.

The square is composed of four equal sides whose interior angles are four right angles. The circle is composed of four symmetrical quarters whose axial radii also compose four right angles. By way of inscribing a circle of diameter d = 1 (equiv.: r = 1/2) inside the unit square s = 1, we find four axially situated points (D₁₋₄ shown above) dividing the circumference of the circle into four equal quarters (each c/4 wherein c = π). These four critical points both simultaneously and geometrically correlate the r = 1/2 circle with the unit square s = 1. Further, these same points compose the square whose side lengths are equal to the reciprocal of √2 viz. s = 1/√2, noting:

By extending any two opposite sides of the unit square s = 1, we obtain the remaining constituents of Φ: √5 (as the diagonal of the emergent 2×1 rectangle) and (a division by) 2. This extension of the unit square can be performed on both sides wherein the 8 vertices of both 2×1 rectangles can be used to compose another larger circle whose diameter is equal to their own √5 diagonal:

By extending the √5 diameter circle in all directions by one (1) discrete unit, we find the real geometric basis underlying the circumference of the r = 1/2 circle (such to measure):

Upon one full rotation, D (= Φ) incessantly coincides with the full circumference of the r = 1/2 circle while”kissing” each of the four sides of the unit square equidistantly. The real geometric square underlying this relation can be obtained arithmetically via:

wherein the irrational √Φ has an underlying magnitude(s) of ±1.27201964… and whose own reciprocal (normalizing to 1) is:

If/when plotting the first three powers of Φ (as they relate to the geometry we are presently working with):

the square of the golden ratio can be seen to geometrically coincide with a real diameter (2r) of a real circle in real relation to a real square(s) of equal area – the emphasis on real being as (in) contrast to “transcendental”. A real circumference of a real circle (ie. π) can not possibly be “transcendental” if possessing a real geometric radius. The area of the inscribed square (whose vertices are D₁₋₄ as shown) is equal to the radius of the circle viz. r = 1/2 = s².

We began by correlating the four right angles of the square to the four axial radii of the circle, the latter dividing π into four symmetrical quarters (each π/4). We observed the four associated axial points to simultaneously correlate the square s = 1 with the circle r = 1/2 and found them vertices of the square s² = 1/2. We also found how the real circumference of the r = 1/2 circle naturally emerges by way of a rotational motion utilizing the real geometry implied by Φ.

We may now obtain the exact circumference of the r = 1/2 circle by observing the nature of the relationship between √Φ and π/4:

The author wishes to impart that Archimedes’ “approximation” methodology catastrophically misses an entire constituency of the circle (albeit small, non-trivially so). A real, symmetrical 1000mm diameter circle will certainly have a real circumference greater than ~3141.6mm (ie. the latter is too short). Should this ever become a source of dispute, the author suggests a simple experiment such to resolve: actually measure a real 1000mm diameter circle, and should it discretely measure (any) more than c = 3141.6mm, the same would resolutely demonstrate the deficiency of a “transcendental” π of 3.14159… as 4/√Φ is a real root of an integral function:

It is the opinion of the author that the very notion π is somehow “transcendental” (let alone “proven” to be so) is absurd. A real circle is composed of a real radius relating four discretely real  loci. While the “approximated” number of 3.14159… is indeed “transcendental,” it is so for a simple reason: it is not really π, but an “approximation” of π deficient from the thousandth decimal place. Because Φ is geometric, π follows, as from the root of the former do we derive the latter naturally by way of reciprocity viz. 1/√Φ = π/4.

As for the golden ratio: the author suggests stripping it of any/all exotic and/or esoteric notions, and rather focus on the real underlying mechanics (ie. the practicality of the relation): Φ naturally couples terminating rationals with non-terminating irrationals and perpetually suspends their sum on a rational base of 2, giving rise to the universally unique (properties of the) Φ ratio.

The geometric union of Φ and π is reflected in/as the above integral function: the real/imaginary roots reflect a discrete rational integer difference of ’16’. The real element is imperatively fixed to the ratio of 1/2 as this constitutes the real, scalar constituency of a real circle, the same 1/2 to be found in/of:

In other words: all real circumferences of all real circles resolutely possess a real, scalable base of 1/2 (such to scale from) and only the golden ratio permits/employs such a universal scalability.

Thus as it concerns the outstanding Riemann Hypothesis problem; in particular, the underlying question:

the problem (ie. question) is outstanding due to the catastrophically culprit “approximation” (ie. deficieny) of π. In short: Euler’s famous solution to the Basel problem such to derive a ζ(2) involves a sin(x)/x relation, thus implies (radians in terms of) a π of 3.14159…

While the solution fits a mathematically constructed “reality” upon a “transcendental” π of 3.14159… the real unrecognized problem is the real, physical universe does not employ such an “approximated” (let alone “transcendental”) π. For this reason, the hypothesis itself is not (only) a problem, but in reality a symptom of a much deeper underlying problem (hithertomeasurable over a span of at least ~2200 years): a deficient π as due to a deficient “approximation” methodology.

The underlying magnitude of such a blunder of millenia compels the author to sympathetically hypothesize: the Riemann Hypothesis problem will not be solved until humanity consciously acknowledges the underlying “approximation” deficiency in/of a π of 3.14159…

Finally, as for the concerned inquiry ‘whence human suffering?‘, though the real underlying root lies beyond the limited scope of this investigation, for the purposes of the latter alone (suffice it to say): as a natural consequence of a more general failure(s) to incessantly challenge basic underlying assumptions (incl. and esp. the bases of any/all oustanding “beliefs”), human beings suffer knowing not how to (properly) measure a circle, as:

such an endeavor rationally provides a real means to discern what is real from what is not (the same needed to discern a real π from an imaginary “transcendental” one). Whereas the latter is a measure of millenia of human ignorance, the former rationally clarifies the universal constancy of both: Φ and π (not as two, but as one).

J.F. Meyer is a pseudonym for the author of this paper who wishes to remain anonymous. The inquiry ‘whence human suffering?’ began as a personal inquiry into the suffering of someone the author refers to as “Isha”. She and her family were displaced from Iraq due to ongoing wars in that region. By circumstance, the author happened to meet Isha, and she eventually imparted to the author her own childhood experiences as involving: being sexually exploited (ie. raped) as a very young child; being forced into an “arranged” marriage wherein she was physically abused to the point she had to flee; being disowned for her choice to marry someone her family did not approve of due to “religious” reasons; being used as added “incentive” for a family business transaction (as a wife/concubine) etc. There is much more to this underlying reality precipitating the inquiry, but suffice it to say: as the author looked deeper for the real root(s) of the suffering of Isha, they found not only what underlies her own suffering, but the (same) suffering of many others. It was for this reason the inquiry naturally evolved from a personalized ‘whence her suffering?’ to a more generalized ‘whence human suffering?’ and is examined according to a scientific methodology(s), the results of which are contained in/as a practical theorem to be made publicly available on the ThinkSpot platform in the near future. The author concludes by stating that now the reader can “perhaps…better understand my wish to abstain from biographical notes: there is nothing of myself that merits any attention before those like Isha, as the latter is the reason for the endeavor entirely.”