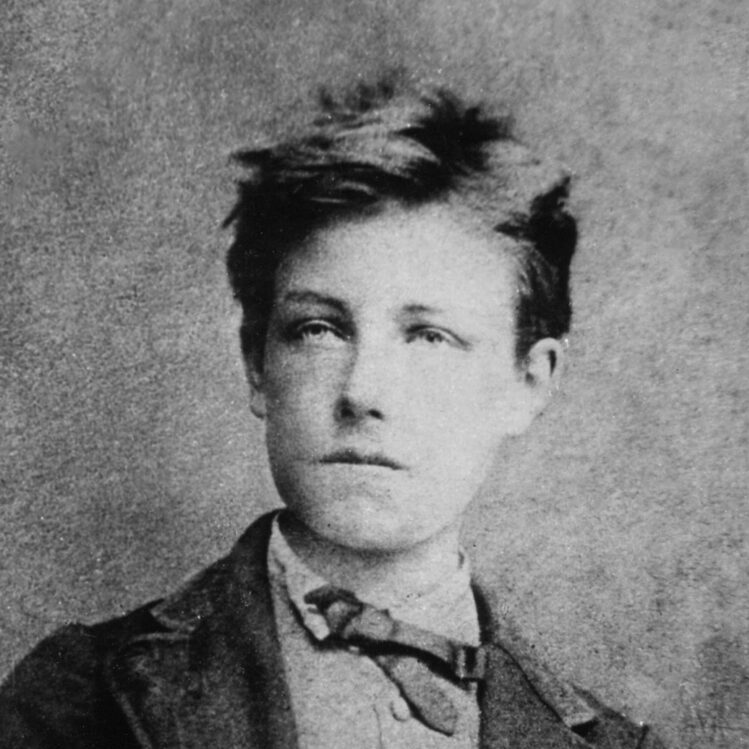 As I came drifting down unruffled rivers,
I could no longer feel the haulers’ guiding pulls.
Redskins had taken the boatmen for bull’s-eyes
and, hooting, nailed them naked to painted poles.

But what did I, an indifferent carrier
of English cotton, Flemish grain, care for crews?
For when this hubbub with my handlers was over,
where the rivers let me go was mine to choose.

In a furious lashing of waves I raced,
emptier, last winter, than a child’s brain
and no unmoored peninsula was ever faced
with more triumphant turmoil on the Main.

Attended by tempests—my benisons—I woke
at morning on the sea where corpses toss
ceaselessly, and danced, lighter than a cork,
ten nights and didn’t once lament the loss

of the lantern with its idiot eye. Sweeter
than the taste of sour apples to a child, through
my deal hull the green waters seeped
and washed me clean of vomit and the blue

wine stains and, after them, grapnel and helm.
Since then I’ve bathed in the opalescent, star-steeped
Poem of the Sea, imbibing amid the flotsam
of its pale and pensive drowned, its verdigris.

More potent than alcohol, and more sweeping
than our lyres, love’s red bitter stains
in slow rhythms and delirium ferment, quick-dying,
in the blaze of day, the deep’s blue veins.

I’ve known lightening-sundered skies and waterspouts
and the currents and the undertow. Dusk, too, I know,
and dawn exalted like flocks of doves ascending
and at times I’ve seen what men have thought they’d seen.

I’ve seen, spotted with mystic terrors, the low sun
laved, illuminating tendrils of tangled violets
like actors in some ancient play, and fluted waves
shivering far away. And I have dreamed green nights

of dazzling snow and kisses rising, slow,
up to the eyelids of the sea, and the flow
of saps beyond belief, and blue-and-yellow
awakenings of phosphorus in song.

And I have followed, for months on end,
the tides’ assault, like buffalo stampeding on a reef
yet never dreamt Our Lady’s luminous feet
could ever muzzle or halt the heaving deep.

I have touched, you know, the shores of fantastic Floridas
where flowers are commingled with the eyes
of panthers in men’s skins and where, like scraps
held out to glaucous flocks, rainbows stretch and rise

up to a watery horizon. I’ve seen the ferment
of immense marshes in whose rush creels
an entire Leviathan lay rotting, and waves collapsing
in a dead calm, and distances close upon the heels

from twisted trees in clouds of black perfume.
And I would have liked to have shown to children
the blue surges and brimming bream, and the golden
singing fish, as, cradled in floral scum, I scudded

with slipped anchor out to sea, and on me
ineffable winds pinned momentary wings.
The ocean, a martyr weary of all zones and poles
and on whose sobbing breast I gently rolled,

sent up, at times, her yellow-suckered flowers
and I stayed there like a woman on her knees, listing
and, between the droppings and the clamour
of squawking seabirds with their washed-out eyes,

almost cut off, I floated, while past my frayed bowline
the bloated dead paraded backwards by, toward their sleep.

I knew no Monitor or Hanseatic ship
would ever come to salvage the sodden cadaver
of such a one as I, just one more keel lost
beneath the trailing tresses of some cove, or tossed

by hurricanes into the birdless ether,
but one who was free, steaming in the violet
haze of fog shimmering up its masts, who’d worn
holes in the red wall of the sky, who brought

delicious jam to good poets: sun lichen and sky snot.
I was a driven, crescent-spangled plank,
pulled by jet seahorses when the sea-blue sky
came crashing down with all its ardent funnels,

bludgeoned by the cudgels of July. I, who trembled
so to hear, some fifty leagues out
the moaning whirlpools and the rutting Behemoth
—eternal spinners of blue lassitude—regret

Europe’s ancient parapets. I’ve seen archipelagos
of stars, islands’ radiant skies thrown open wide,
to the drifter. Is it here in these fathomless nights
that you millions of golden birds exile yourselves

in sleep, O future Vigour?  It’s true I’ve shed
too many tears, at each sad dawn a sack
inflated with harsh love’s heady vapour.
Every moon is unbearable, every sun more bitter.
—O stave in my hull! Let me go under!

The only European waters I still crave are those
of a cold black pond where some poor husk,
a child bowed down by sadness, nudges a boat
as frail as a Mayfly toward a coffined dusk.

No more, immersed in your languors O swells, can I
ride on the cotton carrier’s wake, or strip
the pride of pennants and ensigns down to size
or bear the baleful eyes of the prison ship.

Donald McGrath is a Montreal-based writer and translator. He has published three poetry collections: At First Light (Wolsak and Wynn, 1995); The Port Inventory (Cormorant Books, 2012); and Montreal Before Spring (Biblioasis, 2015), a translation of L’Avant-printemps à Montréal by Québec poet Robert Melançon, who twice received the Governor General’s Poetry Award. McGrath’s poems have appeared in periodicals in Canada and abroad. His poem “Biarritz” was selected for the Web anthology of the 2012 Montreal International Poetry Prize. And his translation of Robert Melançon’s poem “Elégie écrite dans le parc Notre-Dame-de-Grâce” was the winner in the first installment of the Malahat Review’s translation competition, Les poésies francophones du Canada.